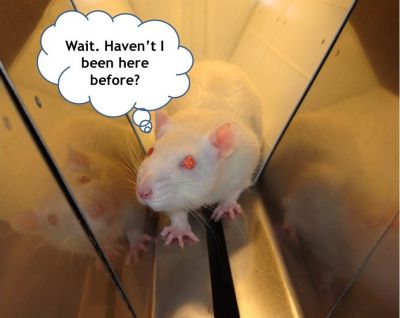 organizes these separate processes remains unclear. Thus, while the amygdala appears to play a more "general" role in memory consolidation, other regions of the brain play far more specific roles. How the amygdala influences the consolidation process in these distinct regions is not known.

Therefore, to address these issues, we combine optogenetic and molecular approaches with different learning and memory tasks in order to assess the roles of specific projections from the basolateral amygdala to different forebrain regions in the consolidation of distinct types or aspects of memories. In our recent work, we have been using a Barnes maze in which escape holes are located in the perimeter of a large circular platform but only one of which actually leads to an escape chamber. This task takes advantage of rodents' natural aversion to open spaces. By varying the parameters of the task, rats are forced to use either a spatial or cued-response strategy to learn where the escape port is.

We can optically stimulate or inhibit different pathways emanating from the basolateral amygdala immediately after each kind of training and, thereby, influence the retention for this training. In addition, we can examine how such stimulation and inhibition alters the expression of plasticity-associated proteins in downstream brain regions in conjunction with the type of learning involves.

These experiments provide a novel method for interrogating those systems controlling memory processes and we hope to use them to come to a significantly deeper understanding for one of the most fundamental functions of the brain and of who we are: Memory.