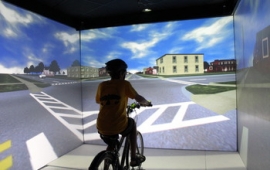 SBE-funded researchers in the Hank Virtual Environments Lab ask a fundamental safety question: What are kids thinking when crossing the street?

Crossing the street is one of the first experiences in a child's life where the concept of taking steps to be safe--looking both ways, listening for danger--comes into play. The researchers in Iowa are looking to learn more about that decision-making process with ultimate goals that include giving parents information that could help them when they're discussing safety with young children. The risks children face on the road are real: 531,340 people were treated in emergency rooms in 2013 after being injured on a bicycle, according to the National Safety Council, an advocacy group aimed at reducing injuries that celebrates June as National Safety Month.

Most of the data the Hank Virtual Environments Lab team has collected focus on children crossing the street on bicycles. Researchers record when kids believe it's safe to cross the street--the point at which they think they see a big enough gap in traffic--and how well that matches up to adults' responses. Children in the 10- to 12-year-old range often are actually close to college students and older adults in terms of the gaps they deem safe to cross, Dr. Jodie Plumert said. The problem is how well they are able to act on those judgements.

"Their timing of movement is not as good as adults," Plumert said. "They delay when they start crossing, and as a result they actually have less time to spare before the next car comes."

Find out more about the research by reading the full article on the NSF website:  Beyond looking both ways.