The Department of Psychological and Brain Sciences has a long history of outstanding achievement in the discipline. As the seventh oldest psychology department in the country, it can claim some of the most distinguished and influential faculty and graduates in American psychology, including Albert Bandura, Kenneth Spence, Leon Festinger, Allan Wagner, Janet Taylor Spence, Donald Lindsley, Kurt Lewin, Benton Underwood, Lewis Lipsett, Abram Amsel, Boyd McCandless, Arthur Benton, Charles Spiker, Tracy Kendler, Gregory Kimble, Sheldon White, Frances Degen Horowitz, Guztav Bergmann, and Isidore Gormezano. Four Iowa Ph.D.s went on to become president of the American Psychological Association, including Bandura, Janet Spence, and Charles Spielberger; only six other psychology departments can claim more. A ranking of the 100 most eminent psychologists of the 20th century listed two Iowa graduates—Bandura and Festinger—in the top five after B. F. Skinner, Jean Piaget, and Sigmund Freud; three other faculty and students—Lewin, Spence, and Underwood—were ranked 18th, 62nd, and 66th, respectively.

The Psychology Laboratory of the University of Iowa was started in 1887 and dedicated in 1890. Like the six American laboratories that preceded it and those that followed, the Iowa laboratory was an expression of a specific historical event and a general philosophical idea. The event, of course, was the founding by Wilhelm Wundt of the Psychology Laboratory at the University of Leipzig in 1879. The philosophical idea, expressed in a variety of ways by numerous philosophers and scientists, was that if the methods of natural science could be applied to psychology, a level of understanding of the human mind and human action would be achieved that would approach our comprehension of physical, chemical, and biological phenomena. 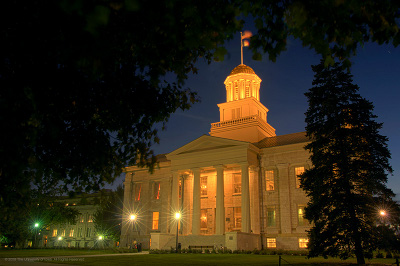 The Psychology Laboratory at the University of Iowa owes its birth to the efforts of George T. W. Patrick, a graduate of the University of Iowa, who received his doctorate at Johns Hopkins University under G. Stanley Hall, who had previously studied both with Wundt and William James. The founding of the Department of Psychology, however, is due to the efforts of Carl Seashore, who was hired by Patrick with the charge of developing a topnotch department of psychology. Seashore received his doctorate at Yale University in 1895 under Edward W. Scripture, also a student of Wundt's. Seashore developed training programs and research in the psychology of speech and hearing, child psychology, clinical psychology, psychological testing, and last, but not least, in various aspects of Seashore's passion, the psychology of music. Seashore's efforts were instrumental in establishing in 1917 the Iowa Child Welfare Research Station. Seashore retired as Head of the Department of Psychology, as well as from the Deanship of the Graduate School, in 1936.

Shortly after his arrival at Iowa in the late 1930s, Kenneth W. Spence became Head of the Department of Psychology. In addition to Spence, the arrival of Kurt Lewin at the Iowa Child Welfare Research Station and the philosopher Gustav Bergmann, created an atmosphere at Iowa in the early 1940s that placed psychology at the cutting edge of theoretical advances that would, it was hoped, transform psychology into a sophisticated natural science.

The key dream merchant for graduate psychology students at Iowa was Spence. These dreams emerged from his collaborative efforts with his mentor at Yale, Clark L. Hull, to create the Hull-Spence theory of conditioning and learning. Over a 26-year span at Iowa, Spence directed an amazing total of 72 doctoral theses.